The Commonwealth Utilities Corporation (CUC) has removed seven of its wells from contributing water to the CUC Saipan water distribution system and is monitoring the quality of water that comes from the Isley Reservoir and Isley Booster 1 near the Saipan International Airport to minimize exposure to these two chemicals.

PFOS and PFOA are human-made substances and are not naturally found in the environment.  They have been used extensively in commercial goods (carpets, clothing, furniture, paper packaging for food) and in materials that are resistant to water, grease or stains such as cookware. They are also used in firefighting foams at airfields and in a number of industrial processes.  Between 2000 and 2002, PFOS was voluntarily phased out of production in the U.S. by its primary manufacturer.

While consumer products are a large source of exposure to these chemicals, drinking water can be an additional source in communities where these chemicals have contaminated water supplies.  Such contamination is typically localized and associated with a specific facility, for example, an airfield at which they were used for firefighting.
EPA has established lifetime health advisories of 70 parts per trillion for individual or combined concentrations of PFOA and PFOS in drinking water.  The health advisories include a margin of protection from adverse health effects when consumed at these levels over a lifetime.

CUC conducted two rounds of sampling of its drinking water supply in 2015 as part of an effort to test for unregulated contaminants (PFOA and PFOS are both unregulated contaminants). While there was no detection of PFOA and PFOS in most of the 23 locations sampled from the CUC Saipan distribution system, there were three (3) locations where PFOA and PFOS were detected above the new 70 parts per trillion health advisory concentration amount that EPA issued on Thursday May 19, 2016.

Two of the locations where PFOA and PFOS were detected above the 70 parts per trillion health advisory level are near the Saipan International Airport.  Water from these locations are distributed to the villages of Afetnas, San Antonio, Chalan Piao, Chalan Kanoa, Susupe, Oleai, San Jose, Chalan Laulau, Iliying, Chalan Kiya, As Terlaje, Kanat Tabla and Fina Sisu (see map below of affected areas). Results ranged from 97 parts per trillion to 310 parts per trillion.

The third location well IF-208, serving the Airport Rescue Firefighting Facility, had the highest concentration of combined PFOS and PFOA of 7,220 parts per trillion, and was removed from contributing water to the general CUC distribution system on May 20, 2016.

In an effort to determine the level, scope, and source of contamination, CUC conducted additional sampling of ground water sources (not just water distribution locations) in June 2016.  CUC received the results in late July 2016 and with consultation and oversight from the Bureau of Environmental and Coastal Quality (BECQ) determined that there were six additional wells that were contributing significant amounts of PFOS to the water distribution system.  On July 29, 2016 CUC removed those six wells from service. It is believed that removing these wells from service will eliminate the elevated PFOS contamination at Isley Reservoir and Isley Booster 1.  CUC collected additional samples on August 1, 2016 to ensure that the removal of the wells from service is effective and will notify the public of the results by the end of August.  CUC is taking these actions to help the general public limit their lifetime exposure to these chemicals.

For more information about PFOA and PFOS visit EPA’s webpage https://www.epa.gov/ground-water-and-drinking-water/drinking-water-health-advisories-pfoa-and-pfos or contact the BECQ Safe Drinking Water Program at (670) 664-8500. 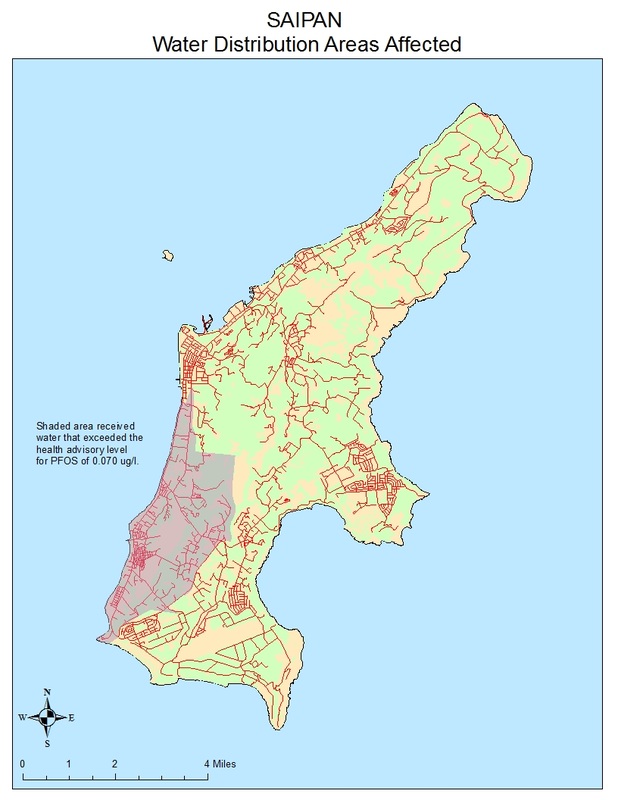